How Voice Assisted Technology is Being Used

What is voice assisted technology?

Simply put, a voice or smart home assistant is a piece of software that communicates to the user audibly, and responds to spoken commands. It’s technology like Google Home, Siri and Alexa that can be used to literally talk to a computer, a smartphone, or another device.

These assistants are becoming more and more popular as the technology grows in sophistication and intelligence. In fact website ComScore recently predicted that by 2020, half of all searches will be done vocally!

Voice assistant control is being welcomed into connected homes across the globe, as people are taking to purchasing voice assistants and smart tech in larger and larger numbers. One of the recent top trends of the smart tech world has been the further integration of devices with these leading voice assistants. From smart light bulbs to smart solar to smart toilets, it’s clear that the people are excited about being able to communicate and control their home.

This kind of excitement has created a surge in the marketplace to produce a myriad of these type of smart devices, especially ones you can address and control.

Therefore, these assistants are becoming viewed as the linchpin of smart home technology, as they are often the face of the multiple devices and brands that make up a smart home. You might have a lot of different brands of technology in your home, but you may only need to communicate with one: your voice assistant.

So this is a new technology?

Voice assistants have been around for longer than you might expect! It comes down to how you define a voice assistant, but the tech definitely didn’t begin the launch of Amazon Echo, Siri or Google Home. In 1961, IBM introduced the IBM Showbox, which is viewed as the first digital speech recognition tool. Sure it only understood 16 words, but this was well over fifty years ago!

'Technavio reports that by 2019, the voice recognition market will be a $601 million industry and  Activate estimates there will be 21.4 million smart speakers by 2020.'

- Asokan Ashok, the CEO of UnfoldLabs

What kind of voice assistants are there?

There are several types of voice assistants, but here are the main players!

4 years ago, Amazon first announced it's smart speaker, the 'Amazon Echo.' This technology was incredibly popular, lauded for the ability to check the weather, monitor traffic, play music and podcasts and more at the slightest vocal command. This launched the smart speaker trend!

Apple came in first with Siri, before the idea of voice recognition really exploded. While Siri originally began with iPhones, it's quickly become an integral feature in software and car products, as well as multiple mobile phone operating systems. Amazon and Google were previously dominating the smart speaker market, but Apple has recently made it's mark by launching HomePod, it's own brand of smart home speaker.

Google's 'Google Home' device has been commercially and critically triumphant, largely due to the vast amount of data that Google already possessed. This includes it's search engine capabitlites and real time information like maps and traffic. Most people have Google accounts or a Google history, and so Google Home has successfully merge it's fantastic voice recognition tech with personalised data.

What do they do?

So what can these voice assistants actually do? Well it differs per assistant, and it also can depend on what those assistants are actually connected to.

Some examples of the type of tasks a voice assistant can perform are switching off a light, or reporting on the weather. But that's just the tip of the iceberg! Google Home has over 200 third party skills, meaning there's a plethora of commands a user can utilise to 'talk' to their voice assistant.

So we can talk to our own homes! Where to next?

Enabling our homes to listen.

By installing a smart hub that talks to your voice assistant, you can manage your Smart Home with your voice by controlling your compatible home automation devices. The ecosystem is expanding all the time, with more and more devices.

Combing home automation with products connected to the web (a platform known as the Internet of Things), has resulted in a wave of smart devices such as these voice assistants, intelligent energy management systems, smart solar, smart door locks, thermostats and appliance and light controls. Many of these devices can even be controlled remotely! 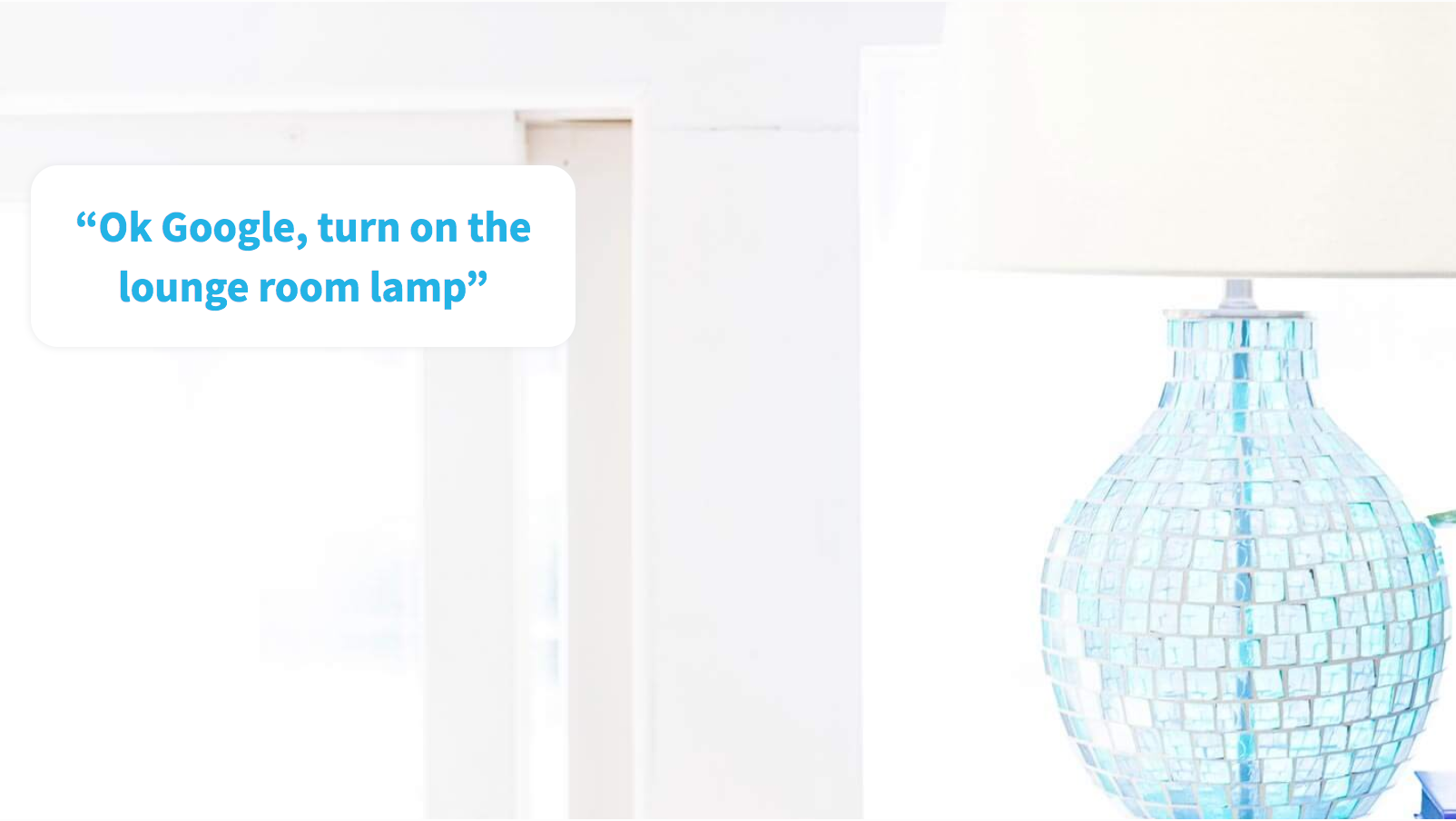 Gooogle Home will ask carbonTRACK to turn on your lounge room lamp, which will immediately respond. You can use Google Home with carbonTRACK to control a wide range of connected appliances – anything you connect through a smart plug.

You can also use with carbonTRACK to control circuit-level switches, like your pool pump or hot water system. Google Home with carbonTRACK can be similarly be utilised to verbally check on your electricity bill, so you know exactly how much energy you’ve used for that month, when you’re using it.

Want to control your home and energy with your voice? You need carbonTRACK. Here’s how it works.